Tartines - A little Too Easy For How Good They Are

Tartines are one of those simple things I was introduced to when I lived in France.  A slice of fresh, hearty bread is topped with meat and cheese and put in the oven until the cheese is melted and golden.  Often served with a small green salad, this makes an easy and very tasty lunch or dinner.

This was dinner last night. 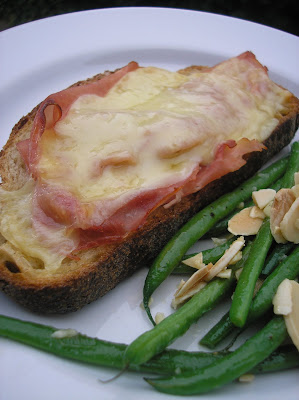 Jambon, which is French style white ham, and Gruyère on a slice of sour bread.  This is a classic combination of flavors; the ham is sweet, the cheese is sharp and the bread is warm and crisp.  YUM!!!

Directions:
Preheat your oven to 400º
Lay out a slice of bread
Pile on two or three thin slices of ham
Top with cheese
and bake for 8-10 minutes.

As for the green beans, these were pre-trimmed harricots verts (string beans) from Trader Joe's that I boiled for three to four minutes then quickly sauteed in olive oil along with slivered almonds.  The almonds get nice and toasty and really compliment the beans.  Try it!  It's gooood.


Mom's Tip
I am terrible at cleaning up my mess after I cook a meal so I have learned some dirty-dish-saving tricks that make a dent in the growing pile in the sink.  This is a time-saving tip too.

For the green beans, I boiled just enough water to cover them in the pan that I was going to use for sautéeing.  When the beans were cooked I drained the water, added a drizzle of olive oil and crumpled in some slivered almonds.  Let it all cook over Med High heat for a couple of minutes and served.