I've gone a little jar happy lately. On my Pinterest page I actually have a board called "Jars and what to do with them." There are so many fun and creative ways to reuse glass jars before they are recycled. Here's one (not so creative) way that I use leftover jars in my kitchen.

Lorelei and I like to have cottage cheese and pears for breakfast or for an afternoon snack on a regular basis. About a year ago I bought a jar of pear halves at Trader Joe's. They were pretty good, but they quickly became my favorite pears because of their container. 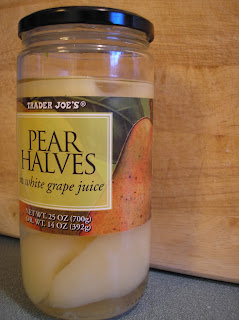 The labels come off easily, they are tall and slender which optimizes the vertical space in the cabinets, and the best part (for me at least) is that I can see what's in them. (I'm a bit forgetful, you see.) 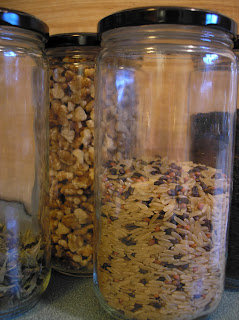 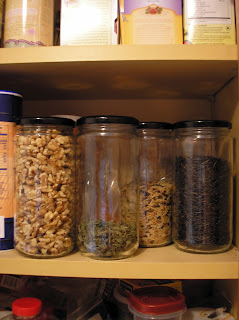 I'm also a sucker for Bonne Maman jelly jars. Honestly I have a lot of these because this Bonne Maman is my all-time favorite jelly, but it doesn't hurt that the gingham pattern of the lid is charming and they stack easily. 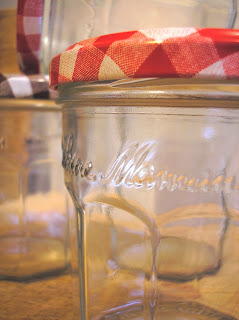 Here are a couple of recipes that I've used Bonne Mama's chestnut preserve:


What are some of your favorite ways to reuse jars? Share your pictures and ideas in the comments. It may just get 'pinned' on my board. ;-)

Our neighbor made Chile Rellenos. Lorelei took a picture. I guess her 'ol mom's rubbing off on her.


Posted by The Food-Minded Mama at 7:59 PM No comments:

This is Dinner! - It's Never Too Early to Lay Down The Law

This is a repost from last year but it still rings very true. I can't tell you how often I see parents let their kids dictate what they will eat for lunch or dinner and, I'm sorry, but it frustrates the heck out of me. Here's one story that I'm not sure I will ever forget.

I recently attended a parent teacher meeting at my daughter's daycare.  It was a brown bag lunch where all of the parents of the toddler classes (kids age 18-months to 2.5 years) sat around a big table and learned about what was happening in the classrooms.  When it came time for parents to ask questions of the teachers, of course the topic of food and eating came up.

The first mom to ask a question had concerns about her 20-month old daughter taking to only wanting bread and potatoes and nothing else.  The teachers and other parents said it was normal and that it would pass.  Then another mom piped in agreeing with the others then continued to say that her boy (2 years old) had eaten the same dinner for for the last year.

I think the sound of my jaw hitting the table made the room quiet (either that or my gasp of disbelief had sucked all of the oxygen out of the room), because the entire table of parents turned to me at once.  I couldn't help myself but blurt out, "You have GOT to be kidding?!  You mean to say that you cook two dinners every night?  One for him and another for the rest of the family?"  She shrugged her shoulder and said with a defeated smirk, "Yep" as if there was nothing she could so about it.

I took a deep breath, turned to the mother-of-a-bread-eater and said, "It's never too early to say to your child 'This is dinner'."  Shock rippled through the crowd of twenty or so parents, but the teachers nodded their heads and openly said, "She's right."  I went on to say that kids will not starve if they don't eat dinner one night.  Yeah they may be hungry later that evening and yeah you may have a long night, but chances are that they'll remember the harsh lesson.

Remember, this is the age when kids are flexing their independence and testing their boundaries.  The act of not eating dinner can be an act of defiance for defiance's sake; they're not doing it because you told them to.  If you let them win this battle (like the mom-of-one-dish did) you are setting yourself up for major struggles when it comes to really important things later on down the line.  You are the boss.  You are the parent.  Even if you don't think so, your kids have to learn that you know what's best.  Following your lead is one way that your kids will learn to trust you.  They may do it reluctantly, but they'll do it and learn from it.  Tell them that you love them, give 'em hugs and kisses, but, "this is the way it is."

(In the same swipe, I'm not a believer in making a kid sit in front of a lone broccoli florete until he eats it.  When dinner is over for the family, he should clear the table and clean up like usual, but there should be another consequence, something that is immediate and appropriate for the offense; in my house it's no SpongeBob after dinner).

All in all, when it comes to cooking for your kids, yes, of course cook to their tastes... to a point.  Introduce something new at least once a week, whether it's a new vegetable, a new protein, a new bread or condiment.  In the end, you will both benefit and (hopefully) you will guide your kiddo into being willing to try new things on their dinner plate.  And, if their minds are open to new foods, perhaps they'll be open to new ideas, people, art, you name it.  That's pretty cool in my book.

The Dog Days of a Seattle Spring

It's cold and wet in Seattle right now. No, I mean really wet and stupidly cold.

I moved to Seattle happily years ago and, for the most part, I love it, but this year, I'm ready for summer damn it!!

Here's my remedy; for me and for Lorelei.

I posted this last year, but I'm resurrecting it... in April... 'cause it's cold.

If you didn't click the words "Spicy Milk" above go to the link below. No kidding, it's really really good. it's our house's version of chocolate milk.

Santé
Posted by The Food-Minded Mama at 9:22 PM No comments:

Healthier ideas for your Easter Baskets

Easter is a week away. If you're like me you're just now thinking about what to do for decorating boiled eggs and getting your kiddos' easter baskets ready to go. When I went to the store yesterday to get the basket fix in's I wasn't surprised to only see chocolate, candy, more candy, and more chocolate stocked on the Holiday isle. I nabbed a chocolate bunny (a hollow one... I feel like such a loser. Must Go Back to get a filled one) then headed off to get some healthier snacks for filling Lorelei's shiny plastic eggs.

Here's what I got:

I liked the idea of using these alphabet cookies from Newman's Own for my preschooler because we could practice out letters and crunch on some yummy cookies at the same time. (That and they are made with organic ingredients and proceeds go to charitable organizations.)

Bunnies. An Egg full of bunnies is a perfect choice for Easter. 'Nuf said.