So I'm thinking that while Lorelei is still quite young home cheese making will not be my next hobby.  Well, maybe not.  It's not that it didn't turn out, because technically it did, but I've been so busy that I just couldn't get around to unsheathing my fromage suspendu, so they were just too dry to enjoy.

This whole thing started when I let some yogurt that I had attempted to make sit too long.  I didn't want to waste the milk so I thought I would make some cheese.  (Why not?!  Right!)


Here's what it looked like when I first hung it. 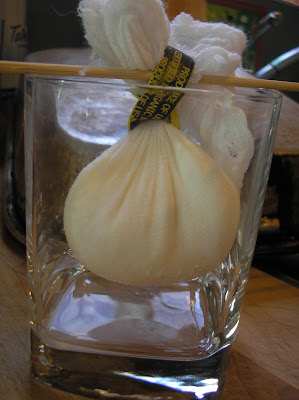 I first hung it in glasses to allow any liquid to fall.  I then hung it between two glasses so that air could circulate around it and dry faster.
Here's what it looked like five days later. 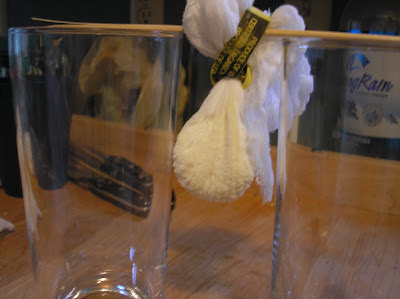 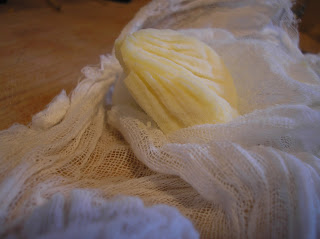 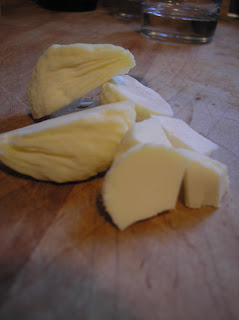 (Please forgive the quality of the 'after' shots.  They were taken at 6:00am, pre-coffee)
The flavor was good, but it was too tangy for my taste.  I spoke to one of my regulars at the restaurant who is a cheese maker for Beecher's and he said that the only thing I did wrong is not add any salt.  If I had the acidity would have been balanced out and it would have been a success.
Next time.
Mom's Tip
This was a fun experiment for Lorelei too.  I showed her what we were doing from beginning to end.  She even helped me unwrap the results... and agreed that they were in fact not a resounding success.
Santé
Posted by The Food-Minded Mama at 8:39 AM