Yesterday after work/daycare, Lorelei and I stopped at the store to pick up some milk and and other things for the house.  As I wandered the isles wondering what the heck I was going to do for dinner, I remembered that time was ticking on the leftover roasted chicken I had bought three days ago.  I've been having a hankering for tacos, so I decided to attempt making them at home.*

I bought some corn tortillas, cheddar cheese, a lime, a packet of taco seasoning, some mild, dried chiles, and hoped for the best.  (Now, I know that taco seasoning and cheddar cheese aren't traditional Mexican ingredients, but being a novice taco maker, I let those facts slide this time.) 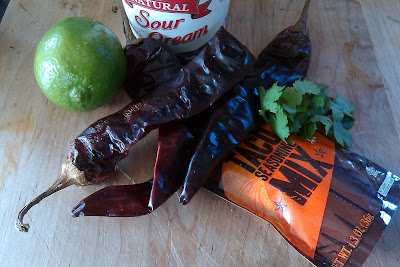 When we walked in the door, Lorelei insisted that we go for a walk.  It was a nice evening and I thought it would be a good idea.

So, I quickly chopped up an onion and sauteed it in a stew pot.  Then I put the chicken pieces on top of that (wings, legs, and a breast) and covered it all with chicken stock and water, added some salt, 1tbsp. of the taco seasoning, a bunch of cilantro, and two of the dried chiles that I had stemmed and seeded (I left them in big pieces so that they could be easily pulled out).  With a final squeeze of lime on top, I covered the pot and set it to boil.

As the mixture came to a boil, I changed out of my work clothes and put the rest of the groceries away.  When we were all ready to go on our walk, I turned the heat down to Medium-low and off we went.

We returned about thirty minutes later and the house smelled amazing!  I strained the juices from the meat and bones, reserving the juices, then pulled out all of the bones, skin and gristle leaving just the well-seasoned meat.

I then steamed the tortillas, and assembled the tacos:
- Meat
- Grated cheddar
- Sour Cream
- Fresh Cilantro leaves
- A sprinkle of salt
- And a squeeze of lime

As we ate our dinner, I thought to myself, "Yum!  And just in time for Cinco de Mayo!"

I was really pleased with the results, and so was Lorelei.  She said, "Mmmm, good job Mama!  Tacos.  Num!"

That's all the praise I need.

Mom's Tip
Tacos are messy business.  For little kids, be sure to strain the chicken well before assembling the tacos... or do what I did and forget totally that they were messy and let the kid have at it!!


*Ingredients will be emboldened for your ease.
Posted by The Food-Minded Mama at 12:33 PM