Trick 'em into eating it - More Ideas on Dessert

This is a Mom's Tip from my post "Let Them Decide - Ideas About What To Feed Your Kid".  It seems apropos to share this bit just after my last post "Ooey, Gooey, Sticky, and Chewy - Defining Dessert" because it's a yummy dessert and a tricky, but very successful way to introduce something as dessert that may not be in your (or your kid's) realm of norm. 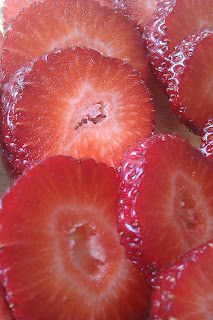 If you're going to introduce something new and you're not sure how it'll go over, be sneaky!!  Keep your game face on but plot against them.  Here's an example.  I had a friend and her two kids over for dinner a few weeks ago.  The kids wanted dessert, but I had nothing to offer except fruit.  Full disclosure; these kids are children of an adventurous chef, so they're predisposed to having a bit of a broad palate.  However, they are still kids and will refuse water if they think it's looking at 'em funny.

Anyhow, back to dessert.  I decided to serve them strawberries with creme fraiche.  I sliced the berries and put them on one side of a bowl, placed a dollop of creme fraiche on the other side, sprinkled some brown sugar over all of it, then (here's my stroke of evil culinary genius) I stabbed a piece of berry with a cocktail fork (which kids love) and put the sucker smack in the middle of the cream.  Now they had little choice but to try the potential offender if they wanted to get to the rest of the dish.  I served all three of those kids two helpings of that dessert and plates were licked!  Ha Ha!! Success!!
Posted by The Food-Minded Mama at 8:00 AM