The world is a very small place; the Seattle restaurant industry is no exception. It's so small, in fact, that sometimes it's like living on a pinhead. (You'll see why in a bit; just keep reading.)

A couple of weeks ago, Matt, the owner of Lecosho, came into my restaurant. I love their braised short ribs and I really wanted that recipe to be the one that I followed for my first foray into the world of braised meat. When I got up the nerve to ask him for it, he said yes! He just said yes!!  I was thrilled and am happy to say that the results were awesome. 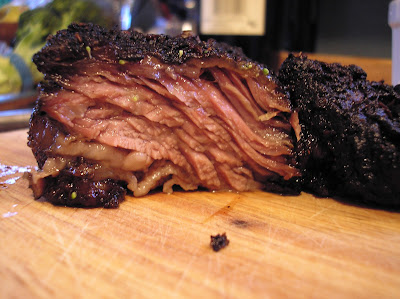 I love Lecosho's short ribs. I have never been a fan of that cut of meat before because, as a recovered vegetarian, I have issues with eating meat off of the bone and I really dislike the texture of fat. (Needless to say, you won't be seeing any stories about pork belly or chicken wings in this blog... ever.) But those at Lecosho are fork tender, coffee-spiced, and succulent. No bones, no squishy fat, just beefy Num!!  (Yes, I know the word succulent is pasée now-a-days in food writing vernacular, but it's really the best word for them, so get over yourself.)

The short rib recipe that Matt sent me was for ten pounds of meat, which is of course a restaurant portion. There was no way that I could a) afford ten pounds of meat (especially if I screwed it up!) or b) eat that much food, so I pared it down to three pounds. 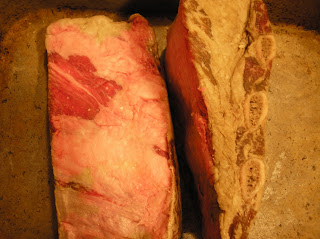 The only problem with that decision was that I had to cut the recipe for the dry rub by one third. It seems like it would be an easy task, but Oy! (Picture me, now, scratching my head, standing over a calculator, and praying that I would get it right.) 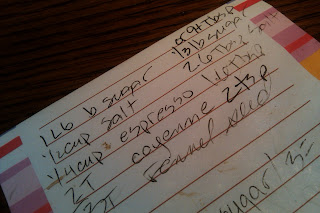 After I squeezed my brain hard enough, the math came out of my head.  And then, to tell you the truth, the ribs were really easy to make.  I put the dry rum ingredients in the food processor, buzzed them up, then rubbed it all over the ribs, covered them with plastic wrap, then let it sit for a couple of days in the fridge. 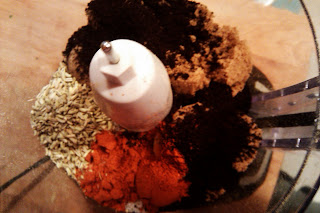 ingredients for the dry rub:
(for 10 lbs of bone-in short ribs. See below for 3lbs) 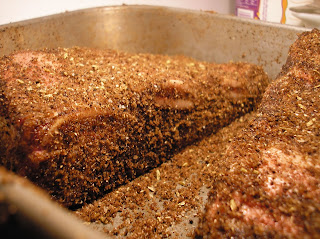 I prepped everything on Friday. When I woke up on Sunday I was so excited to finally be able to get cooking! I was both excited and a little nervous because there was one thing that the recipe didn't have in it; how to make the thick, black, coffee-spiced glaze that I craved and that really made the dish.  Then I looked at what was waiting for me in the fridge. 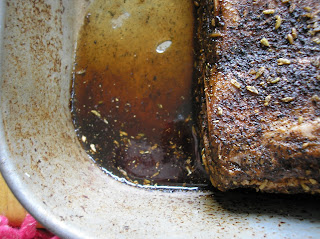 The rub had seeped liquid out of the meat and turned into just what I was hoping for; syrupy goodness!!

From there I followed the instructions in the recipe:
- Preheat the oven to 400º
- Sear the meat on all sides on the stove top 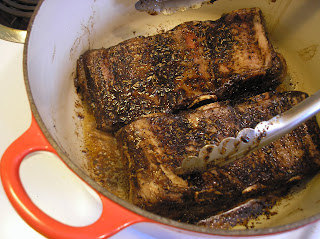 - Take the meat out of the pot and deglaze it with water or stock (I used a box of beef broth)
- Add the meat to the broth mixture
- A step I added* Then scrape the syrupy juices from the marinating pan into the broth mixture.
- Bring all of that to a simmer on the stove top, put on the lid, and sent it on it's way. 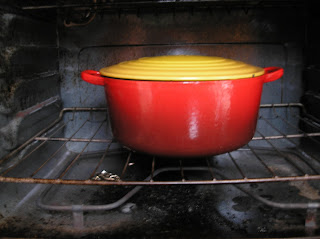 The recipe called for three to four hours of cooking time.  I pulled them out at 3.25 hours. God it smelled good!! Neighbors were actually swinging by asking me what I was cooking. 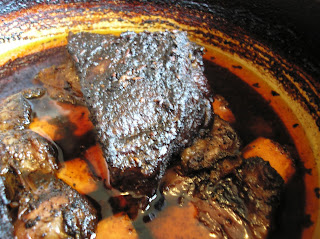 The meat separated from the bone with absolutely no effort. I couldn't wait! But I had to.

More instructions:
- Let the cooked meat rest for at least fifteen minutes
More added steps*
- In the mean time skim the fat from the crock and discard. Then reduce the remaining liquid until thick and bubbly, about 5 minutes over medium heat
- Pass the reduced liquid through a fine sieve to remove any large bits of spices or coffee 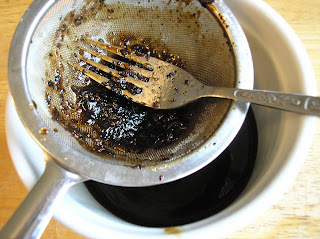 Then, serve it all up!  I made some brown rice and broccoli to go with our meal, and the three pounds were perfect for me, Lorelei and our two guests. 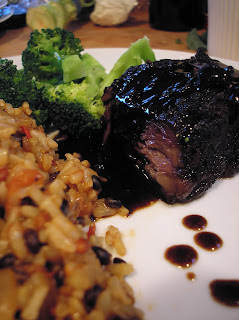 This is the part of the story where the asterisks and small world stories come in.

I'll start with the asterisks.

*Tasting notes from my guests: It was a bit salty. Really, really good! But a little salty. I chalked it up to me goofing up the proportions.

Here's the part about my 'small world' experience: A couple of days ago, Mike Easton, chef/owner of Il Corvo Pasta in Seattle, came in to my restaurant. We got to talking and it turns out that he is the former chef at Lecosho; so of course I bent his ear about how he made the sauce. I told him what I did and he immediately, without me saying anything, said,

Here's what he said to do: Take the juices from the marinating dish and reduce those down with some red wine.  Strain and serve. I felt so lucky to run into him because, now, I can make them again and share with you the best way to make this dish!!

So, braised short ribs à la Lecosho, Mike, and me!

I'm so going to go on a braising kick.

Email ThisBlogThis!Share to TwitterShare to FacebookShare to Pinterest
Labels: recipe