You may be saying to yourself, “Enough already with the pumpkins! Halloween was over a month ago. Get over the pumpkins!!”

I have had pumpkin on the brain since mid October and I am in need of a brain (and picture) dump. Consider this my... 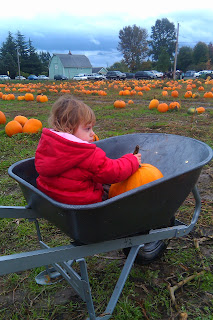 I told you the story here. It was a very fun, albeit wet, adventure with grandma. 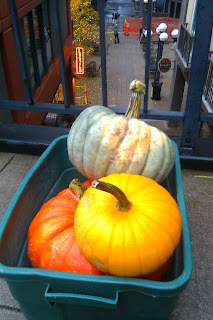 Even though I had three or four pumpkins at home, I was happy to accept the gift of some beautiful Cinderella pumpkins from the gardener who tends to my restaurant’s planters and outside decorations. He literally had the bed of his truck full of pumpkins: large ones, small ones, orange, gray, green and blue ones. I picked out three of the prettiest pumpkins and I thought to myself,

“Self. I can totally carry these to the car three city blocks away before I pick up Lorelei from daycare.”

I hoisted those suckers up in my borrowed bucket and huffed for almost a block before I enlisted a strapping young man (with blue eyes and brown hair, wearing a nice sweater… wait, pumpkins) to carry the other side of that bucket so that I could get those damned things to the car. He helped me get mostly there. I made it the rest of the way, huffing and puffing, on my own. 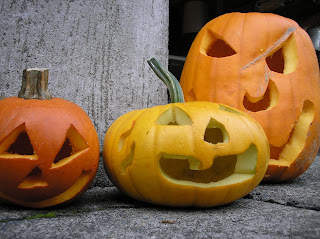 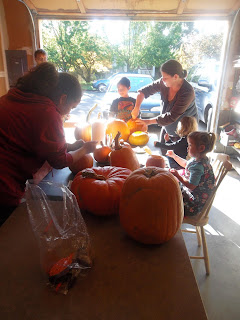 We had five kids, ten pumpkins, and shortbread cookies to keep us busy. I set up card tables in my garage and let the kiddos have at it! We made scary faces, cute faces, and there were a lot of happy faces all around. 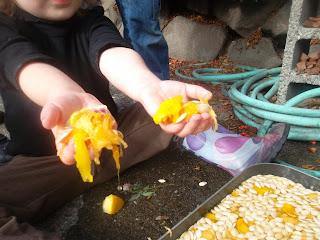 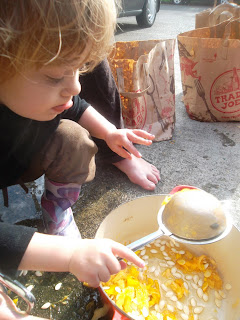 Lorelei helped me collect as many pumpkin seeds as we could from the many, many pumpkins that were carved that day. We squished and swished the guts in water and did our best to collect the tasty seeds for roasting. 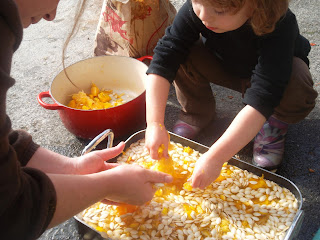 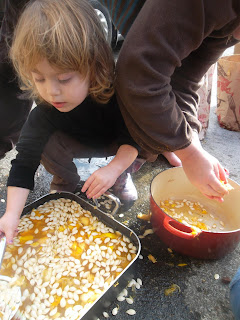 About toasting and roasting the seeds:


Part 1: I brined the pumpkin seeds in salt and sugar for two hours or so then toasted them in a 425º oven until they a deep golden color. 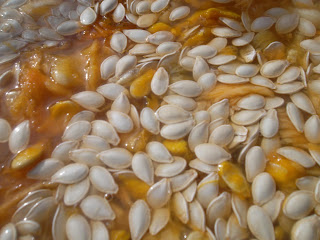 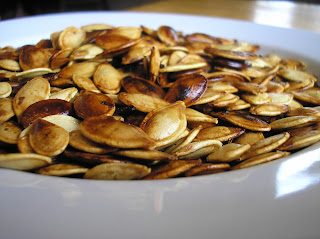 Part 2: In a 400º oven, I roasted the sugar pie pumpkins for a good long time, maybe an hour and a half. I knew they were done when the house smelled warm and gourdy, and when a knife slid easily into the flesh. I let them cool overnight and scooped the flesh away from the skin. 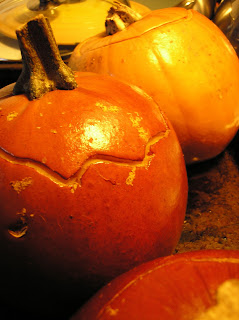 About the bread:
(No picture, sorry. I know! What a let down, huh? You'll be OK. Just breathe.)
That pumpkin puree was staring me in the face for almost two weeks before I did anything with it. “What did you do with it?” you ask? You didn’t ask. DAMN! I thought I had it that time. Ah well.
Pumpkin bread!!!! I followed the Betty Crocker recipe, which is really their zucchini bread recipe that substitutes the pumpkin for the zucchini. It was good, but I’m going to make some changed that will make it awesome!


____________
If you wanted to play a drinking game with the blog post, knocking one back every time I used the word pumpkin, you probably wouldn’t be able to see your computer screen by now.

Happy holidays everyone. I send my best and hope to not use the 'P' word for a very, very long time.