Gnocchi - Part 2, Making it at Home With My Babes

"Yeah, yeah, yeah. So a Chef specializing in making pasta showed you how to make gnocchi. I didn't see your hands in there. You didn't make anything. What does that have to do with me cooking at home for myself, my kid(s), or my family and friends?!" 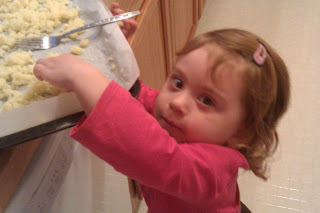 My dear readers, everything!

The point of this series is to show you that if I can cook it, you can too... and your monkeys can help!

(As a reminder, this is a follow up post to Part 1. The formula for the gnocchi dough and instructions on how to form and cook the gnocchi are all here. I am of course happy to answer any questions that you may have, chances are though that your question will be answered in the last post.)

I met with Mike of Il Corvo Pasta a couple of Thursdays ago for our interview and gnocchi tutorial. I had planned to try my hand at making gnocchi the following Saturday, but I got busy... then this and that happened... you know... forgetaboutit!!

Then, both Lorelei and I ended up having to stay home sick last Friday. I decided that this was a good time for us to make our gnocchi; a comforting and definitely entertaining dish to make. We turned off princess movies and SpongeBob for a while and cooked together.

There wasn't much to it, reallty; I followed the steps that Mike had laid out: 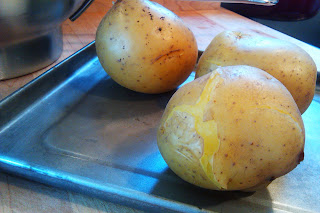 Peel them while they are still hot.
Then pass them through a ricer/food mill and let them sit out at room temperature for two hours or so to let them cool down and dehydrate a bit.
*Disclaimer: I work at a restaurant and I am very lucky to have supportive bosses who let me borrow equipment when I need it for a recipe. I don't own a ricer/food mill nor do I own a scale of any sort, which will be needed in the next steps. (Ok, I own a bathroom scale that lives in my kitchen near the sliding glass door just waiting to be chucked out into nature if it ever gives me the wrong answer. Frankly, after a week of eating pasta because of this post, its time is regrettably coming.)

I let the riced potatoes sit out for as long as I was patient, then I began to pass my fork back and forth through them hoping to High Hell that they would fluff up as nicely as Mike's had.

There was no freaking way that those potatoes were going to be as 'delicately fluffy' as they were at Il Corvo that cloudy yet red-neon-light-drenched morning. (You just have to read my last post to get where I'm going with this imagery. Here, go now.) I'm not sure what I did differently, but I had faith in myself and in the fact that it was only three potatoes; if nothing else I could mash them and serve 'em up with a chicken.

So, seeing that the 'fluff factor' was going to elude me, I did what any semi-sick, impatient, half-way asleep-from-Nyquil in the daytime mom would have done: I put the damn things in the oven thinking to myself, actually bellowing out loud,

I'm fairly certain that those potatoes heard me, because after fifteen to twenty minutes in a 200º oven (and with careful tending) they came out great!!

The next steps were easy. I placed the potatoes in a large bowl, "zeroed" out the scale, weighed them, added 1 egg per 300 grams of potatoes, then added one half of the total weight of the potato/egg mixture of flour and carried on (as seen in the last post. Wanna go there again? It's like magic!! Here)

The best part about making these gnocchi at home was kneading the dough, rolling it out into long snakes, and cutting them into bite-sized pieces with Lorelei. 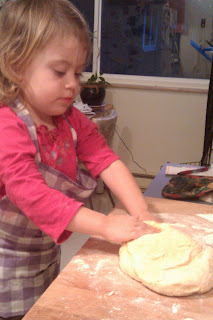 My little girl really wanted to help. She pulled up a chair, grabbed the apron that her Grannie made for her, got her hands in the dough, rolled out the snakes like a pro, and cut them into pieces with her own tool.

"No mom. No, no. Like this." she said, all the while pushing my hands out of the way to get to her work. Chop, chop, chop.

She LOVED helping make this dinner; which meant that she would really enjoy eating it too. (By the way, I gave her a wooden bench scraper as her cutting tool. Plastic bench scrapers are available for a couple of bucks in kitchen supply stores and work just as well.) 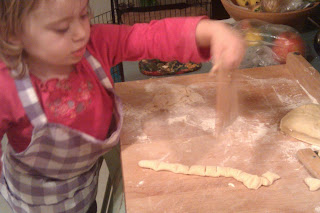 Note: One thing that I really want to stress about this last step, the cutting of the snakes into the final pieces of gnocchi step, is that you really need to have plenty of flour on hand to dust the freshly-cut pieces so that they don't stick together. You can't use too much flour at this point. The gnocchi won't get too dry or gummy; they'll get gummy of you don't use the flour. 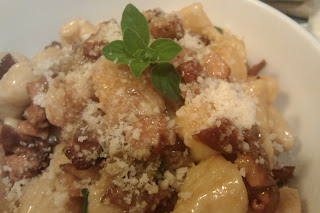 When the dough was all cut and ready, I boiled up the little pillows and tossed them in a simple sauce: here I sauteed some chanterelle  mushrooms with some shallots, chicken stock, salt and pepper and butter to finish.

Truth be told, at this point it wasn't about the sauce; it could have been just olive oil and herbs. What really mattered was that Lorelei and I had spent some creative, productive, and cuddle-filled time together. The bonus was the gnocchi.

Thanks again, Mike, for the lesson on how to make a yummy dinner that is certain to please many for a long time and for the foresight of knowing that making gnocchi is at least a two-person job.

Mom's Tip
You may notice in the pictures of Lorelei working that the fruit was covered with plastic. Yes, I am an awesome mom and had the foresight to cover things knowing that flour and dough would fly. And it did. I did not, however, think about the floor. I would recommend a drop cloth. 'Nuf said on that topic, huh?

Santé
Posted by The Food-Minded Mama at 11:37 PM

What a fun and informative post! LOVE LOVE LOVE your blog!

Do you have a facebook page? I am at www.facebook.com/amyrhoads

So glad you liked it! I do indeed have a Facebook page.

Hope to see you there!

We love to make gnocchi at home and it's incredibly easy to do. We don't have a ricer or food mill either, so instead, we use a fine cheese grater. It works well for an at-home meal.

Love the blog! Keep up the good work!