Lorelei had her first sleep-over at our house the other night.  (Actually, I took care of my friend's two kids for the night.)  It was a crazy day of switching cars, making sure I had all three car seats that I would need to cart everyone to and from their respective daycares, it was a busy day at work and my kitchen was a wreck.  (Yes.  Three car seats.  Yes.  Three kids five and under.  Yes.  I am nuts.)

There was no way in Hell I was going to cook.

So, being the lucky gal that I am who works so close the the Pike Place Market, I stopped and got a smoked trout, some fresh cherry tomatoes and asparagus, some crackers and headed off to gather my little ducklings. 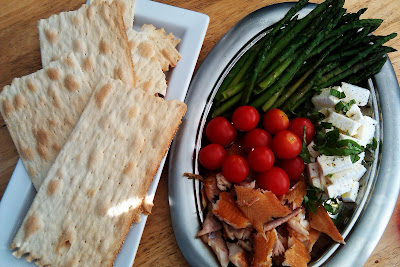 I blanched the asparagus in the one clean pot I had,
crumbled some feta cheese then topped it with fresh basil,
broke apart the fish with my fingers,
rinsed the tomatoes,
cut up a lemon,
put out some Neufchatel cheese,
drizzle of olive oil,
salt & pepper,
TaDAAAA!
Dinner.

One genius thing I did and will totally do again was serve the crackers whole.  They were La Panzanella Croccantini which, as you can see by the picture, the are giant.  So each kid got ONE CRACKER... that was bigger than their head.  Ha!  It was awesome.

"WOW!  These are HUGE!"  (Crunch, crunch, crunch)
Ok, two, two genius things... Not only did we squeeze lemon over our smoked trout, we squeezed the tomatoes over it too.  It was great seeing all three kids chomping on tomatoes and squeezing the guts out onto their giant crackers.

Alright, alright... Three!  Three genius things.  (Man!  I'm good)  Each kiddo was given a butter knife and a ramekin of Neufchatel cheese.  This way they could spread their own cheese and construct their own perfect bites.

I think it will take me a few days to get over our sleep-over, and I expect that I won't be so brave as to take on three at once in the near future, but I will certainly serve this dinner again.


Mom's Tip
It's really easy to have fresh basil on hand this time of year.  I bought a potted basil plant at Trader Jeo's for $2.99.  It makes so many dishes pop with freshness.  Try it!!


Santé
Posted by The Food-Minded Mama at 6:56 AM

Out of the Box Food said...

That looks like a meal the whole family would love!!! Great idea and so easy.

When the kids weren't looking I ate the leftovers. ;-)