Devoured by the Hand That Shot It 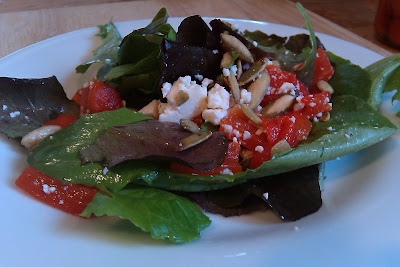 Thursday was Cinco de Mayo.  As I mentioned in my Flan post we had some OK take out and some really good flan (if I may say so myself).  I also made a salad that I used to eat all the time when I lived in California (at El Torito restaurant in Valco Mall).  I had forgotten about it until this week when needed to come up with something green for a crowd of May 5th revelers (Ok, a couple of friends and or kids).

If you thought the flan was easy, get this recipe...


1. Open a bag of your favorite salad greens.  Put in a big bowl.

4. Add some sliced, roasted red bell pepper (I got it in the jar for sake of time, but roasting them is just as easy and often more economical.*)

I like this salad with no dressing because the peppers are so moist and the Pepitas and cheese add so much salt, texture and flavor that it's not necessary.  My guests Lluvia and Rhone preferred it with a squeeze of lime and a sprinkling of salt.

*  In some ways I prefer using the jarred peppers because of the moisture they provide to the salad.  Fresh-roasted peppers are great, but you may want to add a drizzle of olive oil to moisten the salad a bit.

Lorelei wasn't initially keen on the look of the peppers.  I knew that it would be something that she would like, being sweet and vegital (my kid loves veggies), so I slipped one in her mouth and enthusiastically said, "Num! Num! Huh?!"  The chewed slowly and ultimately agreed that they were indeed 'Num'.

Sometimes you just gotta be tricky to get your kiddo to try something that they're not sure of.  The important thing is to show them what it is after they have tasted it so that they can later identify it as something that they like and will be more open to it another time.

Santé
Posted by The Food-Minded Mama at 9:56 PM